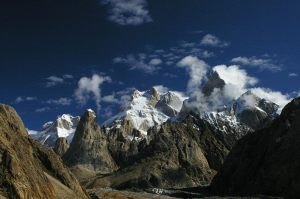 Latok group is a small cluster of dramatic mixture of ice and rock in the Panmah Muztagh, part of the central Karakorum mountain range. They lie just to the east of the Ogre group, dominated by Baintha Brakk. On the north side of the group lies the Choktoi Glacier.

On the west-facing North Ridge of Latok this means the conditions necessary for an alpine style ascent are rare. Succeed in alpine style.The snow pack in the Karakorum was the biggest since 1976, according to the locals, which made glacier-travel easy and ridge-climbing difficult. Here is a report on the most recent Choktoi failure: The Latok comprises four main summits; Latok I, north-central, 7,145 m; Latok II west 7108M; Latok III east, 6,949 m, The other peaks close by are Choktoi 6166m, Baintha Brakk 7285 m, Ogre Thumb, Lukphila Brakk 5500m, Spaldang 5590 m, Biacherahi Towers 5900m. Latok peaks also are accessible from Panmah Glacier and the shortest accessible route to Ogre peaks is from Biafo Glacier. Latok was first climbed by Japanese in 1979 led by Naoki Takada; Latok II was first climbed in 1977; by an Italian group led by Arturo Bergamaschi, they climbed the southeast face of the peak. Big Wall is the nature phenomenon, a precipice which has a steep more than 70 degree and the length more than kilometer. There are 20 largest walls in the world and Latok is among of them.