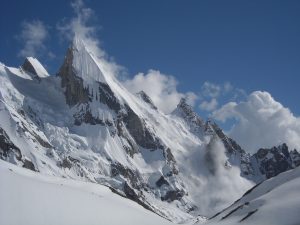 Laila Peak, Hushe Valley is one of the most beautiful and worth seeing sights of the snow covered mountain of the world. The outstanding Laila Peak is located near Gondogoro glacier between Dalsangpa and Khuspang camping site.

Karakoram Range and has been known as a major gimmick for the tourist who are in love with nature.

Laila Peak 6,096 meters have been climbed many times. It can be climbed in five days from base camp simply.
The Laila Peak its distinctive spear-like shape sticking out in the sky has attracted trekkers passing by. Laila Peak got attention in 2005, when Fredrik Ericcson and Jorgen Aamot from Scandinavian countries announced climbing along their Mountain guide (Ali Muhammad) and ski down this beautiful mountain, during their ski Gasherbrum II in 2005 they done ski on Gasherbrum. But they could not make ski on Liala from the top but they ski down from 200 meter below the summit on this beautiful mountain.  After unsuccessful ski trip Fredrik and Jorgen went up to G-2. They described its height as 6614m, and said that Laila Peak is one of the most amazing mountains they have ever seen, like a needle it points straight up in the sky. Its North West flank has a steepness of 45-50 degrees in more than 1500 vertical meters. Early in the morning they starting from base camp at 5000m they continued climbing up the slopes of Laila and at sunrise they saw the magnificent view of K2, Broad Peak and Gasherbrum, they continue for eight hours and now the terrain got steeper and steeper, only a thin layer of snow is covering the slopes. 150 meters from the summit, they felt that there is no way they could ski in these icy conditions and decided to turn around. It was more than 1500 meters vertical meters down to the bottom.

The lower part of Laila Peak is cover with soft snow; the upper part is cover with thin layer of ice, it is mixed ice climbing and rock climbing peak. From the summit one can see all the majors’ peaks of Karakoram including K-2, Broad Peak, Gasherbrum’s peaks and many others. Laila Peak is the most desirable tourism point of skiers, and lovers of natural beauty. It’s a perfect place to enjoy the sightseeing in relaxing atmosphere with cool breeze of air. you need trekking permit from the Ministry of Tourism to visit the Laila Peak. The charges of permits are $50 per person and a licensed guide is also required for the duration. Once you will visit Laila peak, you will definitely understand that all your money is well paid off.