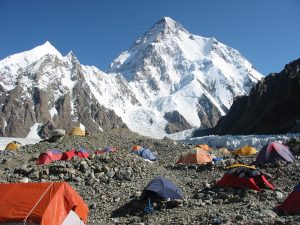 K2 Expedition is considered to be one of the top mountaineering adventures in the world, it combines the thrill of climbing and trekking in the glacial surroundings around Baltoro Glacier with the pleasure of touring in the colourful Himalayan and Karakorum valleys of Skardu, Shigar and Askoli. During the K2 expedition you will have spectacular view of other world famous peaks, Including  Broad Peak (8,044 m), Gasherbrum Group, Chogolisa (7,686 m), Golden Throne (7,365m), Trango Tower and

The first ascent route is known as the standard route or Abruzzi Ridge. The route is used for more than any other route, via the Abruzzi Spur (Southeast Ridge). It was first attempted by Luigi Amedeo, Duke of the Abruzzi in 1909 but was first climbed by an Italian expedition on July 31, 1954. This Expedition was led by Ardito Desio and the two climbers who actually reached the top were Lino Lacedelli and Achille Compagnoni. Also on this expedition was the famous Italian climber Walter Bonatti and Pakistani Hunza porter Mehdi, who proved vital to the expedition’s success in

that they carried oxygen to 26,600 feet (8,100 m) for Lacedelli and Compagnoni. Their dramatic bivouac in the open at that altitude wrote another chapter in the saga of Himalayan climbing. This spur begins at an altitude of 5,400 m/17,700 ft, where Advanced Base Camp is usually placed. The route follows an alternating series of rock ribs, snow slopes, ice fields, and some technical rock climbing on two famous features, “House’s Chimney” and the “Black Pyramid”. Above the Black Pyramid, dangerously exposed and difficult to navigate slopes lead to the easily visible “Shoulder”. The last major obstacle is a narrow couleur known as the “Bottleneck”, which places climbers dangerously close to hanging seracs. It was partly due to the collapse of one of these seracs around 2001 that no climber’s summitted the peak in 2002 and 2003 and most of the eleven people lost their lives due to the breaking of huge ice blocks from this cliff and often on their way down.