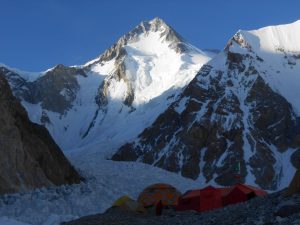 Gasherbrum means “Shining Wall” in local language and the name probably origins. There are six Gasherbrum Peaks. Gasherbrum 1 also known as K5 and Hidden Peak, a name given by William Martin Conway in 1892 in reference to its extreme remoteness, It is the highest peak among them. It is also the 11th highest peak in the world and is the second highest in the Karakorum Range. It is one of the four 8,000m peaks located in a tight cluster on the upper reaches of the Baltoro glacier, the main access route to the mountains which cuts through the center of the Karakorum Range. Gasherbrum-II Climbed in 1956, members of an Austrian Karakorum expedition the party was led by Fritz Moravec. It set up a base camp on the south Gasherbrum glacier. Three reached the summit of Gasherbrum-II on the 8th July and came back without meeting any further accident. Gasherbrum 3 at 7952m is 6th highest peak in Pakistan and 15th in the World ranking Completely overlooked in the rush to the 14, 8000m peaks, G 3 has had only 2 ascents, both by the same route, which put 7 people on its summit; G 4 is rather better known for its remarkable stylishness and for its extreme complexity.
For further more assistance Gasherbrum peak expedition please feel free to contact us.