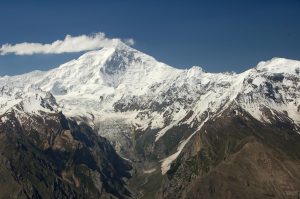 The peak is called Minapin as well as Diran Peak. It is situated in Rakaposhi and Haramosh mountain region near the Minapin, Hinarchi and Baultar glaciers and is easily accessible because of the Karakoram Highway. There is confusion about its height but now all agree that it is 7,272m. Height, it is one of the fascinating peaks that dominates the Gilgit valley and adds special color to its otherwise rugged beauty.

A three-member Austrian expedition, which included Rainer Goschl, Rudolph Pischinger and Hanns Schell, decided to try its luck on Diran in 1968 after being refused permission to climb Kampire Dior peak. It set up camp 1 at 4,800m. Big crevasses, inclement weather and deep snow is recorded between camps I and II. It was from camp Ill that the party was able to reach the peak which it termed as a “big summit plateau”. The 1958-British expedition to Diran peak failed to climb it from north-west face because its leader, E.G.C. Warr and a member, F.C. Hoyte, were struck by storm and disappeared when only 300 feet from the summit. In 1959, a German Karakoram expedition, under the leadership of Hans Jochen Schneider, wanted to carry out a geological and geophysical survey in Batura glacier area. It was refused permission. Consequently, it turned its attention to Rakaposhi area. On the 9th June, one member, Erwin Stocker, and one porter reached an 18,000-foot-col situated to the north of Diran. Subsequently, the party could reach a place which was less than one thousand feet short of north-west face of the summit. In 1964, an Austrian expedition from Salzburg attempted to climb the peak from the north-west face but was unsuccessful because of bad weather and danger of avalanches. The party had only three climbers. 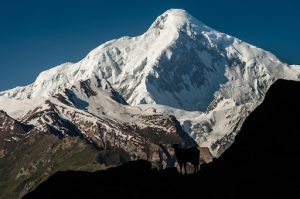 In 1965, a Japanese expedition of Kyoto Mountaineering Federation attempted to climb the peak. Earlier, in 1963 two of its members had reconnoitered the peak. The party was only 250ft from the summit on north-west face when it had to abandon the climb because of ‘strong winds and whirring snow.