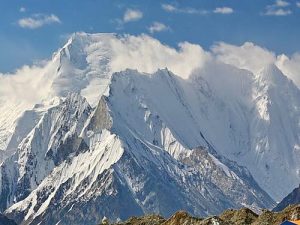 Chogolisa(or Bride Peak)Chogolisa has several peaks; the highest on the SW face (Chogolisa I) rises to 7,665 metres. The second highest at 7,654 meters on the NE side (Chogolisa II) is the one named Bride Peak by Martin Conway in 1892. in1909, a party led by Duke of the Abruzzi reached 7,498m from a base camp located on the northern side and a high camp on the Chogolisa saddle at 6,335m. Bad weather stopped the party from ascending further. During their trips in 1911 and 1912, Mr. And Mrs. Fannie Bullock Workman of USA visited the junction of Chogolisa glacier with Gondagoro glacier. They also looked into the Chogolisa glacier but did not go farther to its main head. They are also stated to have surveyed the visited areas quite accurately.

Herman Buhl and Kurt Diemberger attempted this peak first time in 1957 just two weeks after the successful climb of Broad Peak. They called off their attempt at 7100 meters due to bad weather and on way back the conqueror of Killer Mountain (Nanga Parbat) lost his life.

Chogolisa was climbed by a 13 man Japanese party led by Hiroaki Akiyama on its NW ridge from the glacier west of the peak. They went from Khaplu up the Hushey Valley to set up Base Camp on June 14th at 4240 M on the east bank of the Chogolisa Glacier. Camp 1 was established on June 21 and Camp II at 5220 M on the snow plateau above the ice falls on the 29th. Camp III was set up near the NW Col at 5820 M on July 5th. Camp IV was made on the NW ridge on July 10th. On July 14th Misuo Yajima, Sanji Kabayashi, Testsuo Nakamura and Shoichi Yasuji climbed to the top in eight hours. On the 22nd Hiroshi Narita, Minoru Osama and Akio Kida set out from CIII at one A.M. However, Japan made the first successful North East summit on August 4, 1958.