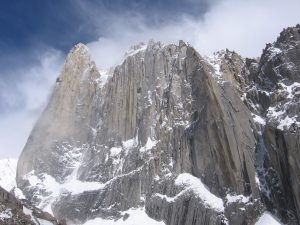 Amin Brakk Nangma valley is one of the most well known and beautiful rock glory  Karakorum Region, The mount Amin Peak is situated in inaccessible Northern Area of Karakorum Baltistan, There more attempts during the summer of 1999 and remarkably tow of these were brought to a successful conclusion. West face of Amin Brakk, West face of Amin Brakk (generally quoted as 5850m but thought possibly higher) close to the head of a side branch of a Nangma Valley, Amin Brakk was first attempted in 1996 by the Basque climbers, Jon Lazkano, when he attempted a line on the adjacent North West Face of Nawaz Brakk during possibly the first serious climbing expedition to this hidden peak, it is one of the most complex and extended wall, it is hardest than Trongo Tower, The face formed the target for a group of a British climbers first saw the wall during a visit previous year. Great Tower First Ascent was by American.

Changi Tower also is part of Amin massif. First ascent by Paul Weber and Ned Norton climbed a route on the Changi Tower, starting to the left of Excess Baggage up a slanting corner system then cutting through the last named route to finish on the North Summit. A Women’s team of Abby Watkins, Vera Wong and Nicola Woodford from Australian and New Zealand team also made first ascents in the Nangma Changi Tower. 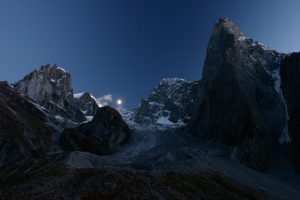 Most of the rock is both granite, gneiss, or schist, however, the predominant rock type is granite, the couloirs then dog legs left parallel to the face and the routes follow this to a small saddle. There also many anthers unclimbed peaks the Peak in the Nangma Valley to make new routes. Climbing of below 6500 meter peaks without any bonding royalty fee. Travel with your guide and have a life time Experience on Amin Barkk Nangma valley

No peak permit requires and Travel with your guide and have a life Experience.